Influenced by the likes of Pentangle, Rob Johnson, Gong, Nick Drake , Can, Grateful Dead and Steve Hillage, Archetypes and fronted by the charismatic Tim Hawthorne. Tim's lyrics betray a beautiful intelligence a mixture of deep emotional, intuitive, other dimensional and mental understanding and tenderness melded together with the power to reach in and enchantingly transport you to another plane

Ascender produces an ethereal. unworldly sound. This is wrapped around the quality songcraft of Luke Brown. They have been compared to early Cure and Radiohead but in truth, theirs a sound of their very own.

Close your eyes and you could be there. Backtrax are dedicated to the art of faithful reproduction of those 60’s and 70’s classics he all know and love. Fancy a trip down memory lane, let Backtrax take you there.

Martyn Barker and the Tea Band

The former Monkey Wrench duo are back to give us their laid back, far out and cool funk.

The Bashies are back! Here again for a special Brixton Party with good VIBES and exemplary DANCE music!!!!
Reggae, Hip-Hop, Dancehall, House, Drum and Bass….
Guaranteed we gonna MASH UP the place!!!

An original, authentic singer song writer that combines soulful vocals with heart felt lyrics. Taking inspiration from the likes of Billy Bragg and John Prine, Andy songs are loaded with an emotive and critical view of the way we live.

‘Ratty’ describes himself as a ‘Crusty, Anarcho, Acoustic Punk..’  Beautiful songs reminiscent of  Patrick Fitzgerald or Frank Turner yet completely his own, Ratty is a charmer. Great presence and is a fab raconteur.

Max delivers a punchy set of rock, grunge, and brit pop classics. Energetic but, sensitivity arranged guitar covers that carry you on a nostalgic trip through the 80’s and 90’s, mixed with a healthy dose of modernism and even the odd Elvis throwback. Heavily influenced by bands such as: Nirvana, Kings of Leon, Blur, Fleetwood Mac and The Red Hot Chilli Peppers, enjoy classic tracks with grungy, punkest inspired style.

Jerry Cahill has variously been described as Ambient Indo European Blues, a cross between ambient guitar music and jazz-folk, and as coming from somewhere between Brian Eno and John Fahey. He has a long association with the Croissant Neuf Stage at Glastonbury and was also largely responsible for starting the Bradninch Music Festival.

A club Deejay of the highest standard. Having plied his trade in the Balearic Islands Cam3l will be playing the tunes to light up a summer’s evening.

Chasing Zeros are a 5 piece Indie Rock band from East Devon. They play the music they write.

Simon is a Devon based singer songwriter who originally hails from Birmingham.  He released his first album, Side 1, this February.   “Genre defying, this Devonian raconteur is, quite simply, an outstanding singer songwriter.”  (Geoff Brown – Shirley Folk Club) “Simon Coverdale’s album, “Side 1”. Songs of love, longing, loss, dreams and memories, sketched and coloured in tantalising lyrics and tender melodies. Couplets to kill for: “I’ve still got the pipe we shared/ You still got the heart that cared”, will catch you and hold you, and then on again, another scene to visit, another tale to tell. One listen isn’t enough: there’s too much to savour in one sitting. I’ll be back again tomorrow. The ghost of Leonard Cohen and the spirits of Willie Nelson, John Sebastian and Bob Dylan et al flit in and around the images that pour from Simon’s soul. A rich and satisfying creation.” (John Meehan – Birmingham Songwriter)Simon’s album can be found at the independent music platform Bandcamp and of course, at all the other streaming platforms including (https://simoncoverdale.bandcamp.com/releases, https://open.spotify.com/album/2LX0HJ4ar3XJIeuAUvgErV?si=esnfyS1BTIeVNg3pTvI–w , https://music.apple.com/gb/album/side-1/1608180138, https://www.amazon.co.uk/gp/product/B09RQ1FPVL/ref=dm_ws_sp_ps_dp)

David is a singer song writer with some topical tunes 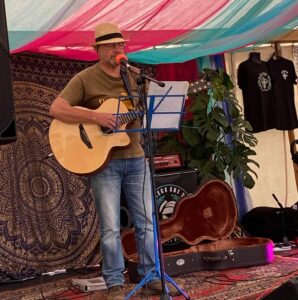 Folk blues full of character, featuring his own compositions and what he calls his ‘twisted covers’. Great late night chill out.

The mighty Tracey Curtis, one of  Britain’s foremost folk singer-songwriter. A truly inspirational and lovely lady who everyone needs to cop an earful of!